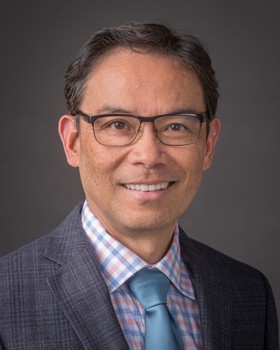 Dr. Benjamin T. Esparaz has been a medical oncologist with Cancer Care Specialists of Illinois since 1989, and is one of its primary founders. He primarily sees patients at our main office at the Cancer Care Center of Decatur, but also sees patients at Pana Community Hospital. Aside from seeing cancer patients, Dr. Esparaz has a special interest in seeing patients with clotting and bleeding disorders.

In addition to his practice with CCSI, Dr. Esparaz has been Medical Director of the St. John’s Hospice Program since 1996. He was chairman of the Department of Internal Medicine at St. Mary’s Hospital in Decatur from 1998-2002 and was chairman of the Pharmacy and Therapeutic Committee at Decatur Memorial Hospital from 1995-2002. Dr. Esparaz was appointed Clinical Assistant Professor for the SIU-Family and Community Medicine in 1996. He was elected Fellow of the American College of Physicians in 1999. He currently serves as Co-Principal Investigator for the Central Illinois Community Clinical Oncology Program and serves on several medical committees. He also served a two-year term as President of the Medical Staff at Decatur Memorial Hospital from 2009-2010.