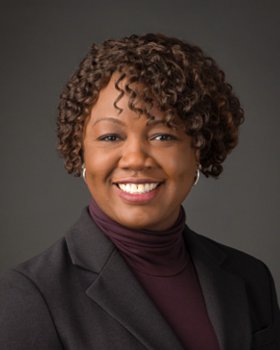 Dr. Williams retired from the United States Army in September 2019 after 24 years of distinguished military service. Prior to the start of her higher education, she enlisted in the United States Army as a Nuclear Biological and Chemical (NBC) Specialist, attended the United States Military Academy Preparatory School (USMAPS) under recruitment for track and basketball, but ultimately participated in track and ROTC and received her undergraduate degree from Rutgers University in New Brunswick, New Jersey, in 1999. She received her Doctor of Medicine at the F. Edward Hebert School of Medicine with the Uniformed Services University of the Health Sciences (USUHS) in Bethesda, Maryland, in 2003. After completing a transitional internship at the Dwight D. Eisenhower Army Medical Center in Augusta, Georgia, Dr. Williams completed her residency in Radiation Oncology at Northwestern Memorial Hospital in Chicago, Illinois.

Before joining CCSI, Dr. Williams served as the Assistant Chief of Radiation Oncology Services at the historic Walter Reed Army Medical Center in Washington, DC. She spear-headed the opening of a new Radiation Oncology department in Northern VA at Fort Belvoir Community Hospital (FBCH) where she also served as the Chief of Radiation Oncology Services. As a past Physician surveyor for American College of Radiology (ACR) accreditation team, she assisted in evaluating radiation oncology clinics seeking accreditation, in adherence to excellent cancer care standards. An assignment at the Armed Forces Radiobiology Research Institute (AFRRI) gave her the opportunity to travel the world teaching first responders on the important topic of response to radiation incident/accident, as an adjunct to chemical and biological emergencies. She enjoys teaching on the topic of radiation therapy and has done so on multiple platforms.

Dr. Williams has specialized skills in 3D-CRT, IMRT, SRS/SBRT as well as certification in Proton Therapy. She is board certified and holds membership in the American Society for Therapeutic Radiology and Oncology (ASTRO) and American College of Radiology (ACR) and serves on the ACR Committee for Women and Diversity, ACR Radiation Oncology Committee, as well as ASTRO’s Committee on Health Equity Diversity and Inclusion. She was appointed by the Governor and Senate confirmed to serve on the Maryland Board of Physicians and is a Fellow, Federation of State Medical Board. She has several radiation oncology publications and also enjoys community outreach programs. She is an avid advocate for patients understanding the complexities of the cancer treatment process and have worked with various organizations to promote patient education. She achieved multiple awards and honors throughout her military and clinical careers, but considers the highest awards those letters of appreciation received from her patients, community organizations, and success of mentees in her pipeline program.